Check out these four original studies.

Her real name was probably not Jezebel, but her corrupting influence was so great that the Lord changed her name to associate her with the notorious wife of King Ahab. The first Jezebel cor- rupted Israel (1 Kgs. 16:31); the second Jezebel corrupted the church in Thyatira (Rev. 2:18-29). This study is one of twenty studies on Lesser-Known Women in the Bible. They are all available in English and Japanese.

We believe that the removal (rapture) of true believers will take place before the seven year tribulation period begins (1 Thes. 5:9). Yet, there will be many who come to faith in Christ during the tribulation period. Most to these will be martyred for their faith (6:9-11), and these martyrs will call upon the Lord to avenge them (6:10).

During the tribulation period, especially the second half, the Lamb of God will be judging the world, those who oppose Him and his people. This judgement will involve war (6:3-4), famine (6:5-6), and death by various means (6:7-8). Millions will be killed by hungry wild animals (6:8). The worksheet below is on these "beasts of the earth." 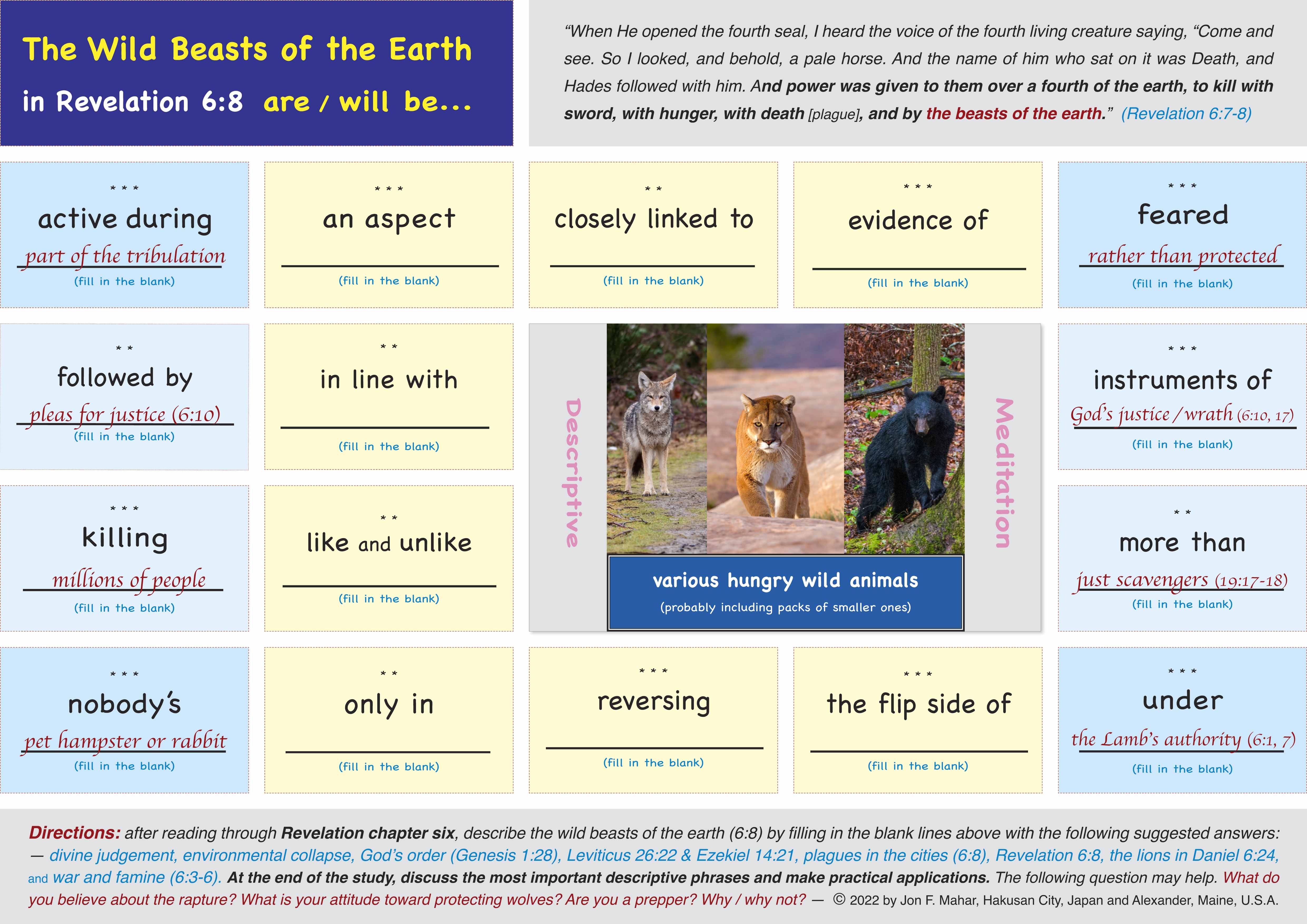 The wild animals come last on the list in 6:8. So apparently more people will be killed in and by war, hunger, and pandemics, than by the animals. Nevertheless, since the population of the world is now very large, there will still be millions killed by starving beast of prey. Being killed by a wild animal will probably be more common in rural areas, while dying from disease will be more common in cities.

Interestingly, these dangerous wild beasts are only mentioned in chapter six which seems to be about the beginning of the Great Tribulation (the second half of the seven years). Later in 19:17-18, only scavenging birds are mentioned. So perhaps most of the dangerous wild animals will die of starvation before the end.

How should we apply this study? Some may think that Revelation chapter six shows that we should work harder to protect the environment so that wild animals have enough to eat. Others may think that they should become preppers in order to have food for their family and fend off wild animals. Though these ideas may be valid to some extent, ultimately human efforts will always come up short. Moreover, since the rapture will come before the tribulation period, the most important thing now is to believe in the Lord, like Noah did in his day, in order to avoid God's judgement (1 Thes. 5:9).

This simple descriptive study makes use of the Describe-It-Yourself set of 1,300+ cards. The first photo below shows selected cards which describe an all-too-common negative attitude toward the book of Revelation and chapter eight, and the second photo below shows selected cards which describe a positive attitude toward the chapter and the book as a whole. Click this link to get your own set of cards to do your own descriptive analysis of the chapter.

God's word is good, but our attitude toward various portions of it sometimes is not. For instance, many think of Revelation chapter eight and the first four trumpet judgments as difficult to understand, dark, sad, and above all scary. Does this mean that there is something wrong with the chapter? No, of course not. Rather it indicates that there may be something wrong with our attitude. 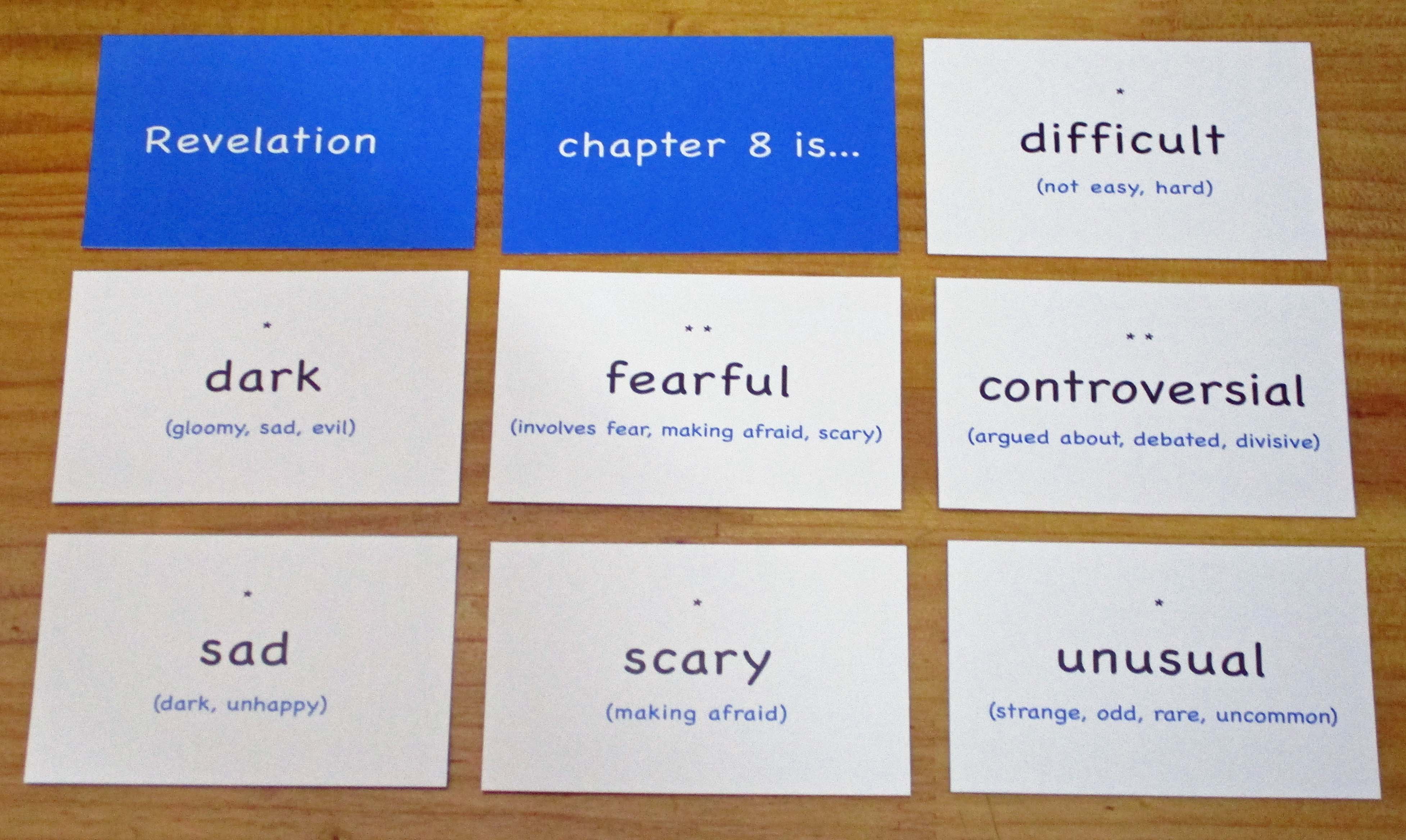 If our attitude toward Revelation in general and chapter eight in particular were more positive, we would find it interesting, impressive, practical, and perhaps even scientific since it is about that which God has created. Some believe that this may include a gigantic meteor (8:8), a commet (8:10), and a huge volcano (8:7). 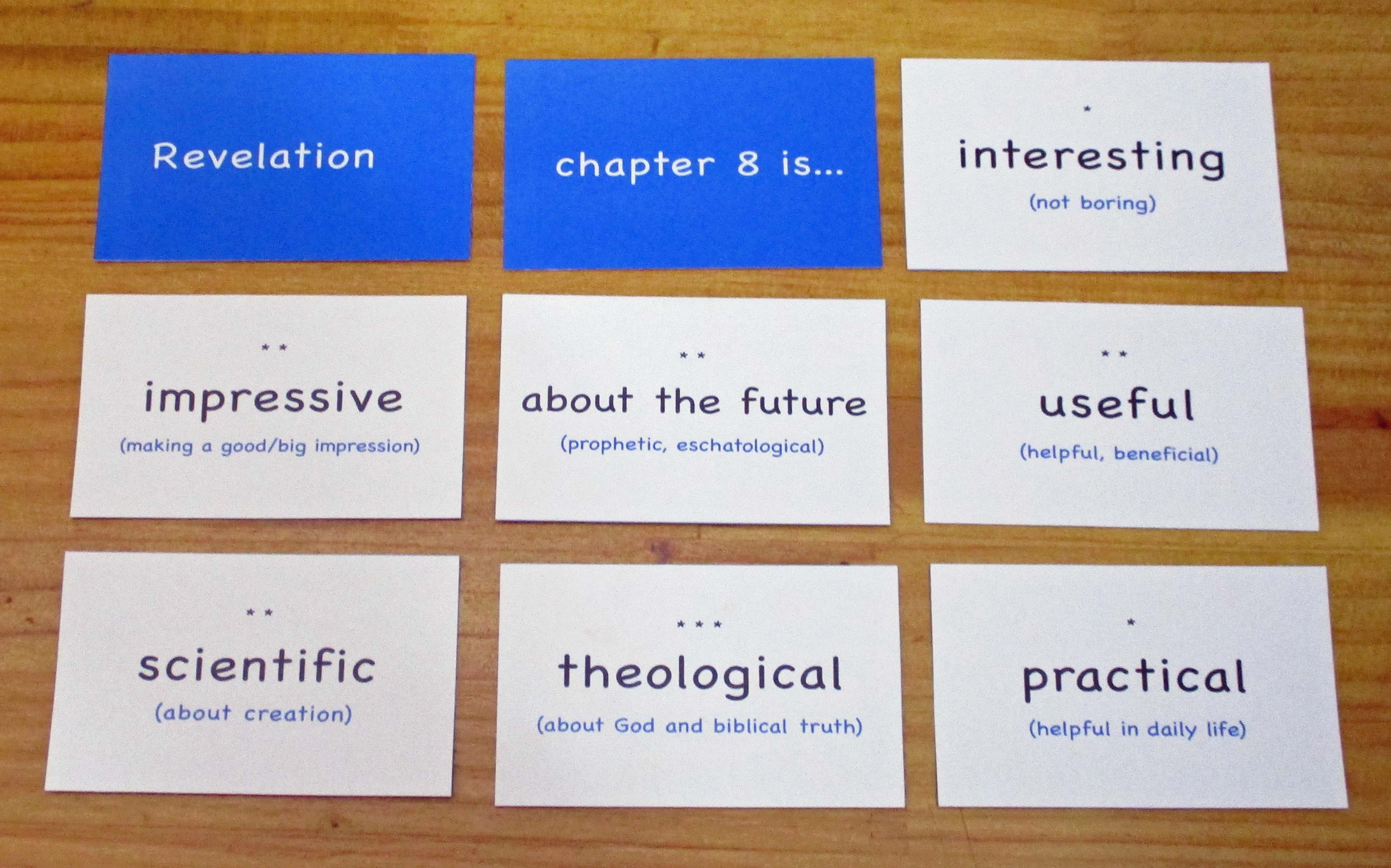 More importantly,  Rev. 8:1-13 can help us fear the Lord instead of being worldly, much like Peter's message in Second Peter chapter three does. This world and the heavenly bodies will not continue as they are forever. Judgment is coming, and everything will be changed.

This descriptive study makes use of the Describe-It-Yourself set of 1,300+ cards. The photo below shows selected cards from the set arranged in a square to describe the New Jerusalem, which most people think of as heaven. Click this link to get your own set of cards and make your own diagram.

How would you describe the New Jerusalem in Rev. 21:1-22:5? It will apparently be shaped like a gigantic cube (Rev. 21:16). So the diagram below is shaped like a great square with four main points. More important than the shape and size, however, are its PURPOSES. Why is the Lord Jesus, the Lamb, making this great place for his people? 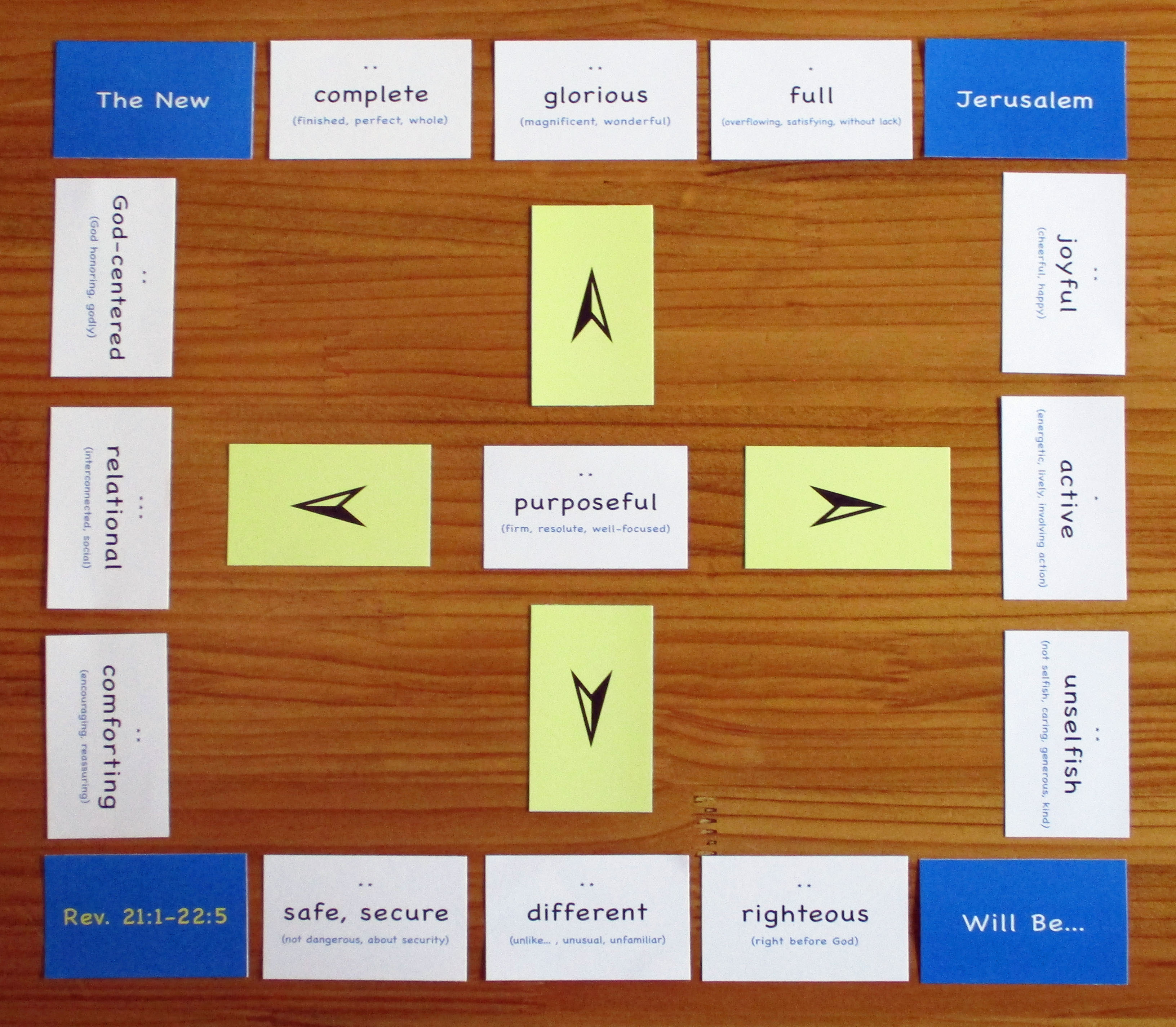 This layout shows that life in the New Jerusalem will be gloriously different from life on earth today. Yet, it will still be a relational and active place. The passage shows that there will be plenty to do in the New Jerusalem (Rev. 21:24-25, 22:3), since we were created and saved to serve. This will not change in eternity. The opposition of the wicked, our human selfishness, and the weakness of the flesh will all be things of the past, however. So serving the Lord will be more joyful and fulfilling in the New Jerusalem, our eternal home.