Check out these studies in chapters 10-13.

The four steps in the I.D.E.A. Bible study method is designed to show what is a truly good idea and what is not. This is counseling, and in Heb. 10:19-39 the inspired author counseled the Hebrews against turning from the Messiah because of persecution (10:32). He showed that apostasy was a very bad idea for many reasons, one of which is that they would not be able to avoid trouble by turning back (10:28-30). Continuing to live by faith was the way to go (10:38-39).

The author of Hebrews shows what well-known people in the Bible who lived by faith believed and did. Ten of the Bible Top 55 are shown to be active, by-faith people in this chapter. The two most prominent of these are Abraham (11:8-12, 17-19) and Moses (11:23-29). By faith they both did as the Lord willed rather than turn back in any way. They went forward by faith rather than quit despite persecution and the lack of full assurance (11:8, 17-18, 24, 38). ‍Moreover, Abraham and Moses followed the Lord personally rather than remaining with the unbelievers around them in Ur (11:8) and Egypt (11:27). Noah (11:7) and Rehab (11:31) also clearly left unbelievers behind. There is a strong emphasis on personal faith in chapters ten and eleven. So chapter 11 lends support to the personal, anti-apostasy counseling in chapter ten. -- Of course, there is also a new fellowship of believers (10:23-25, 33-34, 11:20-21, 25, 12:1) which replaces the old connections with the lost.Above all, like the history of Israel and the lives of Abraham and Moses, Hebrews chapter 11 is directional, chronological, and forward moving. So it is not just about faith in general. It is about future-oriented faith, even though the testimonies of various important characters from the past are cited as evidence for such.

Hebrews chapter 11 is obviously about faith, but as this chart shows. there are some aspects of biblical faith which are not as obvious as others. For instance, verse three is the only verse in the chapter about God as the Creator. Yet, this is foundational. So it is mentioned early in the chapter. The miracles set forth later, such as the birth of Isaac (11:11-12), are possible because there is a Creator who cares about his people. Likewise, the term "sin" does not appear in the chapter, but the sins of unbelief and apostasy are clearly seen (10:39, 11:15, 12:1-4). Moreover, Jesus is not directly mentioned by name in chapter 11, but he is the Creator in verse three (See John 1:3.) and typically represented by Isaac in verses 17 through 19. 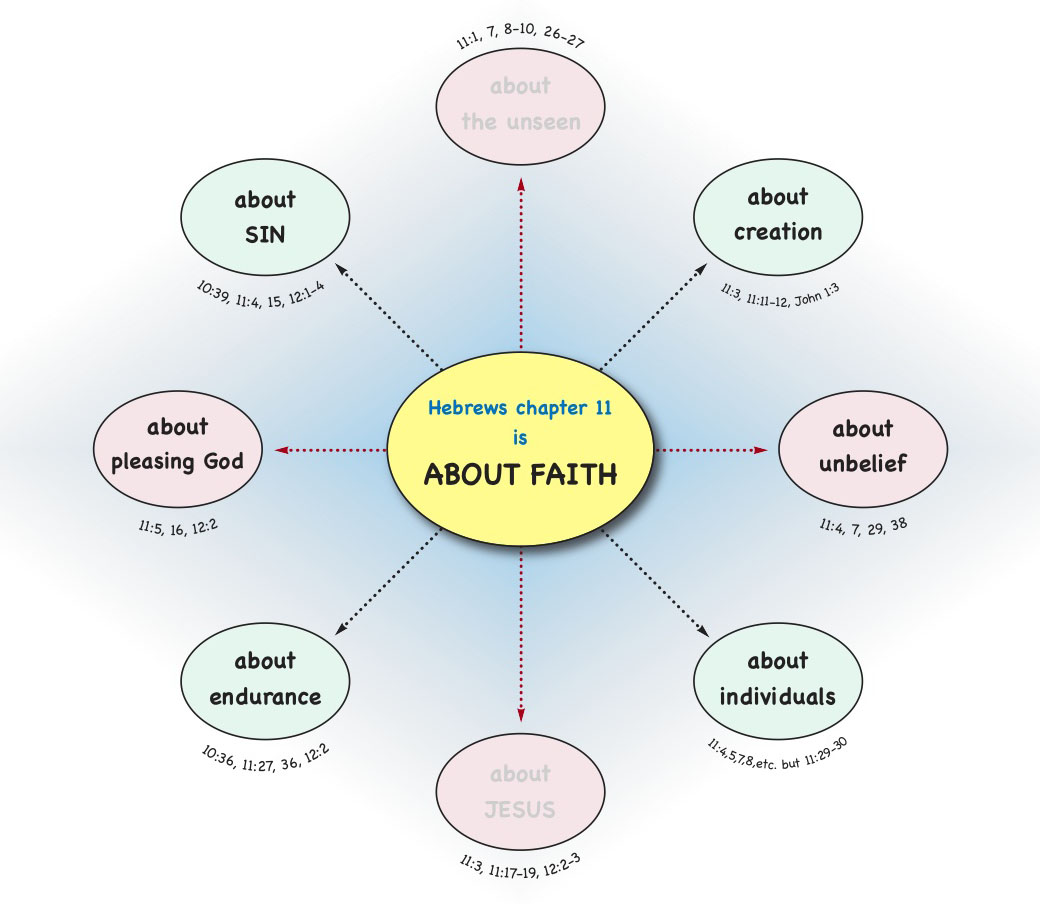 Through much of the chapter the endurance of Old Testament believers are set forth as examples for the Jewish readers who were being persecuted for Christ. Biblical endurance involves more than just being patient. 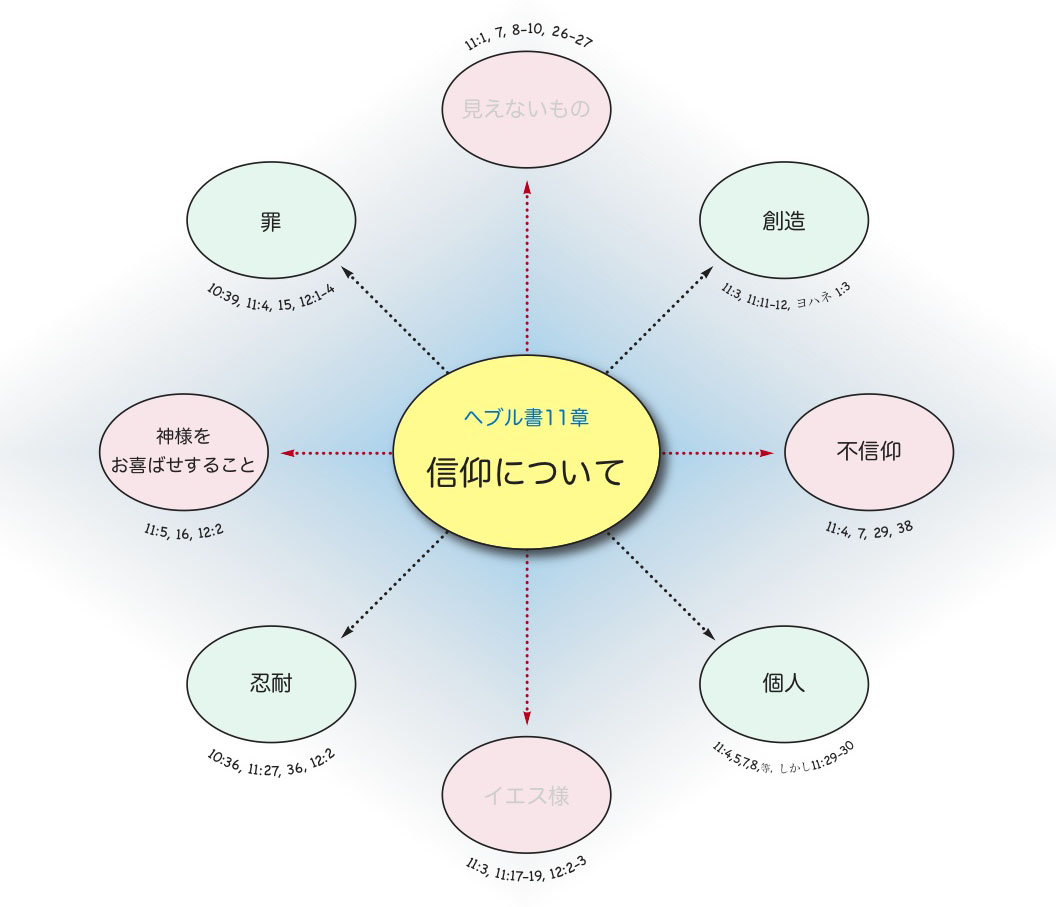 As in the Gospel of John, the personal faith of individuals is stressed in Hebrews chapter 11 because each Hebrew believer needed to stand firm against pressure from the unbelieving nation. Yet, the collective faith of true believes is also mentioned a few times (11:29-30), since there is wonderful fellowship in Christ.

Hebrews 11 is full of contrasts.

There is much contrast in Hebrews chapter 11, the first being between Abel and Cain (11:4). There is also an implied contrast between Enoch who pleased God by faith and most of his generation who did not (11:5). The dwelling in tents of Abraham, Isaac, and Jacob contrasts with their entry into the heavenly city (11:8-10, 15-16). The safe crossing of the Red Sea by the Israelites contrasts with the drowning of the Egyptians (11:29). By faith, Rehab did not perish with others in Jericho (11:31). Near the end of the chapter in verse 38, God declares that the world was unworthy of the ministry of his servants. Finally, there is contrast between the position of  believers who lived before the coming of the Son and those in the church age (11:39-40). This is reminiscent of the contrast drawn at the beginning of the Letter, in 1:1-2.In all of these contrasts, the author showed his readers that the only truly biblical and Hebrew thing to do was to choose to suffer in the present age with God's people rather than enjoy the pleasures of sin for a season and perish in the end (11:24-26).

There is much about Abraham and Moses and Hebrew history in both Hebrews chapter 11 and Psalm 105. Yet these two chapters are also very different. In Hebrews, the by-faith actions of the patriarchs are stressed, but in Psalm 105, God's actions and provisions are the focus. The psalmist called upon God's people to make the Lord's wondrous works known (Psalm 105:1-3), but the author of Hebrews primarily set forth examples of biblical living. Thus, human responsibility is stressed in Hebrews chapter 11, though this stress is perhaps more clearly stated at the end of chapter ten and in the early verses of chapter 12.Though God is, of course, present in Hebrews chapter 11, especially at the beginning of the chapter regarding creation (11:3), for the most part His work is behind the scene and not directly stated. Not directly stating that God gave victory to the various Judges (11:32-33) is an example of this. Because of this, the need for people to make right, by-faith decision is more clearly seen in Hebrews 11 than in Psalm 105. Abel, Abraham, Moses, and others in the chapter made good choices. So too should the readers of the Book of Hebrews (10:36-39).

Whereas Hebrews chapter 11 is about various Hebrews—and a few Gentiles—who pleased God by faith (10:38, 11:6, 14-16), the first 13 verses in First Corinthians chapter ten are about Hebrews in the wilderness who did not please God because of their unbelief and idolatry. The thematic relationship evident in these two passages may help show that Paul is the author of Hebrews as well as Corinthians. In both cases, these historical happenings were written for our learning (1 Cor. 10:11). Thankfully, there is much more written about those who pleased God than about those who did not. 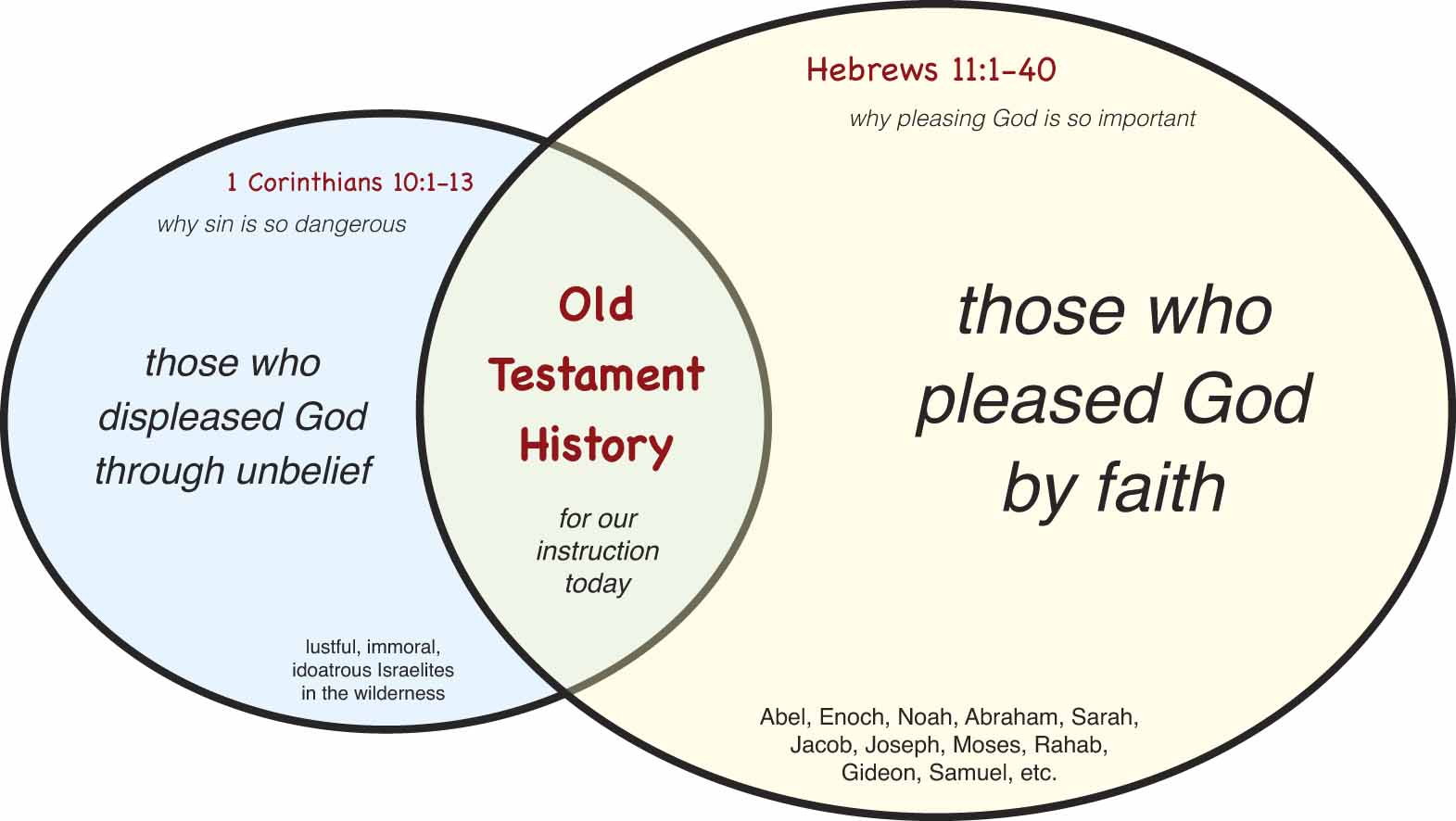 The key terms and phrases on remembering and not forgetting appear four times in Hebrews chapter 13, more than in any other passage in the New Testament.

Hebrews 13:2 Do not forget to entertain strangers, for by so doing some have unwittingly entertained angels.

The author commanded his Hebrew readers to not forget to entertain strangers and reminded them that some in the past, such as Abraham and Sarah in Gen. 18:1-3, had entertained angels (13:2). In this, he may have called for remembering a specific command in Scripture (perhaps Deut. 10:19 in the Old Testament and / or Rom. 12:13 in the New Testament) with the memory of a hospitality story or stories. Linking all these biblical memories make the command stronger. The command to remember prisoners in 13:3 may be based on what the Lord Jesus taught in Mat. 25:36, or the command may simply mean to not forget to help believers who are prisoners. The reference to being in the body (and subject to pain) in 13:3b supports this view. So the remembering in 13:3 seems to have more to do with continuing to do good in the present than with remember the past. The same is true in 13:7 and 13:16 as well.

Hebrews 13:3 Remember the prisoners as if chained with them—those who are mistreated—since you yourselves are in the body also. . . . 13:7 Remember those who rule over you, who have spoken the word of God to you, whose faith follow, considering the outcome of their conduct. . . . . 13:16 But do not forget to do good and to share, for with such sacrifices God is well pleased.

The second half of 13:16 implies that temple sacrifices and the temple itself would soon be gone, but the first half of the verse shows that doing good and supporting the Lord's work in material ways will continue to please God (13:15-16). Things were about to change greatly (13:14). What had not changed and would not change was God's will for his people to do good and support his work, though the giving would cease to be at the temple.Moreover, the goodness of the Lord Jesus was and is the same forever (13:8). In line with this, the God 101 list shows that God did good in creation and that ALL his works, past, present, and future are good. Therefore we also, who have been saved by grace, should not forget to continue to do good (13:16) even though some things in life change greatly. Though we all fail in doing so, HE will still complete his good work in us (13:21).